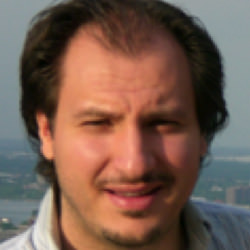 "... what had been the study , research and investigation has become my job!"

I attended the first edition of the Master in " Satelliti e PiattaformeOrbitanti " in 2002, I remember that I faced the selection to the Master full of expectations and hopes for my future in the area of space,technologies which had always fascinated me. During the interview, my passion for Satellite Navigation, born during the preparation of my thesis, got the better on some of my gaps in subjects like aeronautical and telecommunications,having been graduated in Civil Engineering.

During the Master I was able to fill these gaps, approaching subjects and topics such as "Environment and Space Science missions" or "Orbital Mechanics" for me until then completely unknown. I came prepared, therefore, to the phase of the Master which included an internship of 6 months in one of the most cutting-edge Italian Space Industry. From that moment what had hitherto been to me study, research and investigation, it became my job. Today, after 12 years I am still working onSatellite Navigation and in particular on the Galileo program that despite the downsizing of funding extended to the world of space technologies, it still remains one of the most ambitious and complex programs funded by the European Commission.